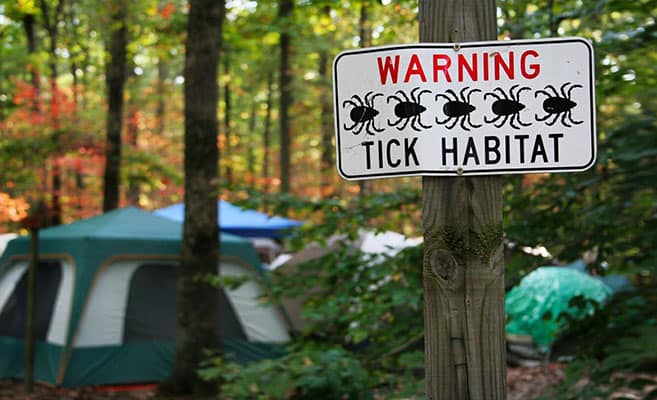 Saratoga is a beautiful city comprised of gorgeous lakes, dense meadows, ponds, racetracks, beautiful breeds of horses and lodges. Every year Saratoga County attracts about 1.6 million tourists that generate over $1 billion. But unfortunately our region is also an ideal setting for ticks to thrive. What is causing the Saratoga tick outbreak, and why has this issue become worse year over year?

Indeed ticks infest in humid and warmer regions, hosting on mammals. And when they are not being picky, they have latched onto birds and have even been present in cold-blooded animals such as lizards in other parts of the world.

Experts believe the rise in tick cases in New York may result from dense forestation, abundant wildlife and climatic changes. Last year these conditions led to the highest outbreak in reported ticks and tick-related disease cases ever in Saratoga county. This has set up the scenario where this Spring Saratoga tick and pest control companies have been responding to the increased demand.

Get to Know the Tick

Tick comes from an arachnids family of parasites. Their primary source of diet is the blood of mammals and birds. They also, however, occasionally feast on reptiles and amphibians. After they consume the blood, they become fuller. Typically, they measure around 3 or 5 mm, depending on fullness, age, sex and species. Ticks were mostly in temperate, humid and warm climates in the past. Scientists recently found that ticks have become more resilient and reach much more northern than ever reported. Their ability to survive winters and reproduce has created exponential growth yearly.

One can classify ticks into two categories: Ixodidae and Argasidae. Ixodidae are hard ticks native to southern Africa and of the most primitive known species with a pear-shaped body type.

Fact: The oldest tick found was in a fossil dating back to 100 million years old in the Cretaceous Period.

Ixodidae have eight legs with a beak-like mouth. Their body swells enormously after blood feasting. Ixodidae undergo one, two or three-host life cycles while going through four stages – egg, larva, nymph and adult.

Looking at Argasidae, these are known as soft ticks and have a mouth on the underside of the body. They have seven nymphal stages and require blood ingestion to transform for the next stage. Ticks track the host by body heat, moisture, body odor and vibrations in the environment. Argesidae goes through multi-host life cycles, causing various diseases in humans and animals.

Both Ixodidae and Argesidae ticks have different life cycles. But all species undergo the key four stages – egg, larva, nymph and adult.

In this lifecycle, the ticks stay on one host through all stages, only leaving to lay eggs. When eggs develop into larvae, they look for a host to feast. When they find a host, they attach themselves as they go through the nymph stage and create into an adult tick.

As soon as they reach prime age, the female ticks mate, and this is about time she leaves the host to lay eggs. The female tick then finds a suitable place to lay eggs. Albipictus and Boophilus microplus are examples of a one-host life cycle.

Hatchlings that turn into larvae look for a host to get their first blood meal. As soon as they turn into a nymph, they engorge themselves with blood meal to leave the host. In a two-host life cycle, a pregnant female tick falls of the first host it clung to, only to lay eggs.

Then they stay in a natural environment to develop into an adult. It usually happens during Winter days. Later with the start of Summers, newly developed male and female larvae that have turned into adults lodge on a host for their next blood meal.

They prefer to host on a larger animal as soon as they feed. Male and female ticks mate only for a female tick to drop from the host to oviposit in a natural environment.

Most ticks from Ixodidae species have a three-host life cycle – and this lifecycle spans three years. Around the Fall time, the female tick leaves the host to lay eggs. Usually, she lays thousands of eggs, and as soon as larvae emerge, they lodge onto smaller mammals for the first blood meal.

Right around Summer, the larvae drop off their first host when full, only to molt into a nymph. The nymph finds a second host for the next blood meal and morphs into an adult tick as Summer approaches. Finally, the adult tick seeks larger mammals during springs – third host, preferably cattle or humans.

On her time on the third host, a female tick mate and feasts on a blood meal. Once complete, it drops off the host only to lay eggs. 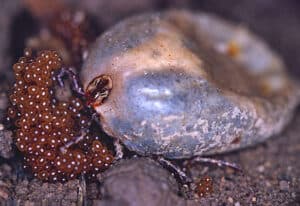 For this species, male and female ticks mate off the host. After the eggs hatch, they host on closest host – the first blood meal can last for days or hours. These ticks have seven nymphal stages and require a blood meal to morph for the next stage.

Soon the larvae move away from the host to alter into the next stage. The process keeps going until the nymph reaches the last stage of an adult tick. After becoming an adult tick, they keep having blood meals on and off for months or years, depending on their life cycle. On average, an adult female tick lays thousands of eggs in its lifespan.

There are various reported diseases in humans caused by the tick’s bite.

What is Lyme’s Disease?

One of the most reported diseases followed by the tick bite, Lyme disease, is caused by the black eight-legged tick. Initially, the symptoms appear as:

Some rare implications of the tick bite recorded in specific individuals:

These reactions won’t necessarily present upon each tick bite. A bite can go unnoticed in some individuals and disappears just like a mosquito bite within a day or two.

But the above symptoms are classic signs, and anyone with any of these signs should monitor them closely. Since these bites create problems in individuals with compromised immune systems, such as elderlies and infants, it is vital to seek immediate medical care. After careful examination, the doctor may clean the bite site and prescribe antibiotics.

Various causes may have contributed to recent tick outbreak in Saratoga County. Scientists suggest that the reason is still open to argument, but preliminary inspection directs to some conclusions. It’s not just upstate NY experiencing these outbreaks; various states have jumped on the preventive measures early on. In multiple states across the United States, doctors have seen a sudden rise in tick populations each Summer since 2017.

For starters, the changes in land-use patterns may have significantly contributed. People are moving to the suburbs and rural areas, putting the ticks, mice, deer and pets in close contact with humans. This change in priorities and back-to-nature mid-set puts gives Saratoga ticks the perfect recipe for interaction with humans. From campfires to hiking, let’s face it, the reasons people come to enjoy this part of New York are some of the highest exposure activities to these harmful pests.

Reforestation can also contribute to the growth of ticks. Environmental changes made to the county, including protecting land, increasing plantings and reducing clearing, are suitable for these blood-chasing menaces. When not hosting, ticks can live under piles of leaves until they need their next blood meal. Dense wet woods and high grass can also play a part. Back to nature also exposes us to all that nature provides, good and bad. 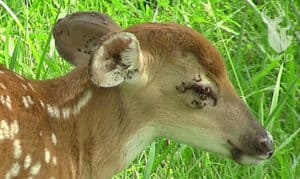 Also, climate changes make a difference. Winters aren’t as long, allowing for longer and increased warm and wet periods. Hence the ticks thaw soon; it makes the best weather cycle for ticks. It may still be unclear to the scientist, by the change in weather patterns are a huge contributor.

Lastly, the beautiful red plant, the Japanese barberry shrub, became an instant favorite due to its fiery color – believed to be a perfect host for ticks. The plant looked beautiful and was adopted by nurseries and homeowners instantly. This plant’s tick attraction was discovered in October 2021, followed by a ban to sell or cultivate the shrub. It may require years to eradicate the shrub in the state altogether.

The Adirondack Region has seen increasing wildlife populations from the milder winters. Less and less populations of specifically deer and mice have contributed greatly to tick populations. Without the blood meals they cannot reproduce and thrive. Most concerning is that we are seeing a large increase in rodent infestations inside homes which can bring ticks right into a unsuspecting homeowners property. This is one way ticks can get inside and live inside a property.

Cautions for Travelers and Homeowners To Adirondack Region

Here are some steps to avoid tick bites for you and your family.

Remember to treat your pets for ticks. Dogs are generally more prone to catch ticks and tick bites. They can also be a carrier of ticks into your homes. Discuss with your veterinarian for preventions and methods to keep ticks at bay from your pets.

If you see more than one tick inside the house, you need to call professional pest control services. It is best to address the surrounding property before home dwellers get sick due to Lyme disease.

In recent development due to recurrent tick explosions, the Centre for Disease Control and Prevention (CDC) began the process of the TICOVACTM Vaccine license in the United States. The vaccine has been used across Europe for two decades and will likely get approval in 2022 CDC is reviewing the vaccine for safety and effectiveness.

How to Remove Tick

If you’ve found yourself with an embedded tick, follow these instructions:

Tick Is Here To Stay In Saratoga 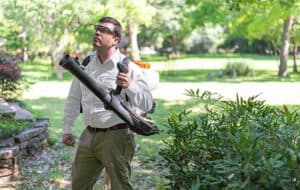 Unfortunately, now we know how fast they replicate and grow in number. Also, ticks’ choice of the cocktail is mammals and human blood.

Ticks thrive faster in the humid and warmer climate, hence Saratoga has become the hotspot for tick infestation. EnviroPest offers monthly packages for homeowners in Saratoga Tick Control during the summer months in the wake of recurrent infestation. Our professional targeted tick treatments are applied to all the conducive and surrounding areas around your home or business to educe and eliminate tick populations.

When you see these pests in your homes or pets, don’t waste time calling professional services who have complete knowledge of eradicating the pests. EnviroPest is one of the masters in the league. They are champions in cleaning your homes from such pests. Since they have been in the business for over 30 years, they provide high-end and meticulous services in nine regions of upstate New York.

EnviroPest has highly professional and trained staff with experience of over ten years. Their services are thorough, and all the procedures adhere to the guidelines of controlling ticks throughout your home and property.