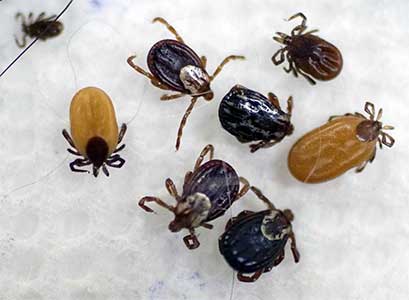 For most of the population, summers mean slathering on heavy sunscreen and protecting themselves against the harmful effects of the sun. However, the folks in the Northeast have more than just sunburn to worry about. As temperatures rise and residents begin to spend their time outdoors, Lyme disease caused by tick bites becomes a more pressing concern. Once you find ticks the next question is what ticks carry Lyme disease.

Just consider this: the U.S. Centers for Disease Control and Prevention estimates around 300,000 cases of Lyme diseases every year. While undoubtedly alarming, the good news is that there are measures that you can do to prevent tick bites that cause Lyme disease. We tackle this and more in the guide below.

Small and gross — when describing ticks, these are two things that we know to be true. However, this also describes just about every other arachnid around. So what do ticks look like? More importantly, what do deer ticks, the known carrier of Lyme disease, look like?

Generally, ticks are oval. When unfed, they look flat, but they can quickly change in appearance once they have eaten.

The size of deer ticks changes as they go through their life-cycle stages. In their early stages as larvae, they are about the same size as a single grain of sand. This size is roughly 1/32 of an inch. It is interesting to note that at this stage, the larvae will only have six (6) legs instead of eight (8).

As they mature and become nymphs, they grow to 1/16 to 1/8 of an inch. This size is about the same as a poppy seed.

In their adult stages, just before they latch on and have fed from other animals and humans, they are about the size of sesame seeds. However, they can bloat up quickly once they have gotten their meal.

The colors of deer ticks vary. Sometimes they can be grayish-white or black, a trait often associated with adult male deer ticks. The ones that are reddish-brown are the female deer ticks.

There are over 30 species of ticks found in the New York area. Out of these 30 species, only ten will bite humans and other animals. Now let’s narrow this a bit more: only 4 out of 10 biting species in New York State carry diseases.

Deer ticks are the only ones that can transmit Lyme disease. On top of that, they can also cause babesiosis and human granulocytic anaplasmosis. In their early stages of life, deer ticks are nymphs. They are roughly the size of poppy seeds and are brown. When they mature and take on the size of sesame seeds, females turn to a more reddish color and are black in some parts. The males, on the other hand, are mostly just black.

This type of tick is reddish-brown and slightly bigger than other ticks. They are known carriers for the bacterium that causes Rocky Mountain spotted fever.

Lone star ticks look a lot like adult female deer ticks. They are known to transmit germs that cause human monocytic ehrlichiosis.

Also known as groundhog ticks, this type of tick looks like deer or black-legged ticks. They can potentially spread the Powassan (Encephalitis) virus disease. The rundown for this section—Although you’ll find a variety of ticks in the New York area, there are only four species that can transmit diseases. Out of these 4, only the deer tick or the black-legged tick are known carriers of Borrelia Burgdorferi that cause Lyme disease.

How To Protect Yourself From What Ticks Carry Lyme Disease

Lyme disease can cause many health problems that range from inflammation of the joints to neurological and heart problems. And because immunity thru a vaccine to Lyme disease has yet to be developed and administered to people, you need to take on a more active role in keeping yourself and your loved ones safe against tick bites.

But how exactly can you protect yourself from Lyme disease? Prevention is one way not to worry about what ticks carry Lyme disease. To get you started, we’ve listed down the following guidelines:

Here’s another reason to stick to more festive colors this summer: you can spot ticks more quickly if you wear light-colored clothing. Of course, other preventative measures that keep ticks and other parasites at bay include wearing long pants and long-sleeved shirts when you’re outdoors. Make sure to gear up properly when you go on hikes by wearing socks and closed-toe shoes.

Deer ticks are less likely to transmit Lyme disease to you when removed within 24 hours after they have attached to you. So, regularly checking yourself and your loved ones for ticks can help. When outside, make sure to spot-check often. And when you get home, be sure to take a shower and put your clothes in a high-temperature dryer. Actionable tip: always check between your fingers and toes, your hairlines, your belly button, your underarms, and behind the ears. Thorough and frequent tick checks are one of the most effective ways to prevent Lyme disease transmission.

Sometimes, wearing the right clothes and checking for ticks often just don’t cut it. One more way to prevent ticks from sticking to you is using repellents. For this, you have two options: you can use DEET products or products with permethrin. The former is more gentle— preventing ticks from latching without killing them. However, they are not guaranteed to work 100% of the time. Products with permethrin kill ticks but are pretty harsh on the user. The latter, on the other hand, is more aggressive. If you opt for this solution, avoid spraying directly on your skin.

A professional tick spraying company will treat all the areas where ticks live around your property. It is necessary to treat horizontal surfaces like your lawn but, more importantly, vertical surfaces such as ornamentals and high grass areas that act as tick breeding areas. Professional tick pest control companies will treat your property every three (3) to four (4) weeks to maintain tick population reduction.