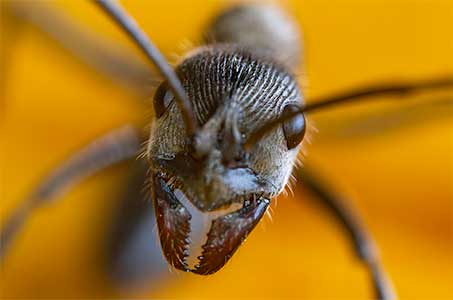 As soon as the ice melts, you cannot stop wondering about all the backyard picnics or outdoor birthday parties you want to squeeze in this Summer. Unfortunately there are certain uninvited guests can invade your cozy garden party in no time. We’re talking about ants. They are more annoying than harmful, but there are some species can bite. The most dangerous ant bite comes from the bullet ant, native to Central and South American rainforests. And it is most likely here in the Rochester are you are not going to see one in your life. But even is you don’t have bullet ants, there are plenty of species of ants in upstate New York that might have you reaching out to a ant exterminator.

Locally carpenter ants are a common sight. Their bite is irritant and leaves a red welt or pustule for some hours. One of the first sign of the Spring in Rochester is when ant exterminators have their phones ringing off the edge due to the invasion of these crawlers.

Ants: Up, Close and Personal

Ants, like bees and wasps, belong to the family Formicidae. They are social animals and thrive in colonies. These are resilient creatures and date back to the early cretaceous times, meaning ants survived, but dinosaurs didn’t. They can thrive in all weathers. This resilience to weather means you will find them in all parts of the world except Antarctica.

Ants live as a unified entity, in a group or nest that comprises wingless female ants, winged male ants (also known as drones), and the queen. The queen has the longest life span of all of them. She lays billion of eggs in her life cycle. Meanwhile, male ants have a shorter lifespan, and female ants live for some weeks or often months.

Since they live in groups and work together for their living, you will always find colonies of ants. They forage on leaf litter, decaying plants, invertebrates, insects, and wood. Some ant colonies grow incredibly fast and can eat up the house’s wood. This nesting in cellulose is especially true when looking at wet lumber. Hence, new and old homeowners immediately should contact a Rochester Ant Exterminator to stop the damage to the structure.

Some Astonishing Facts About Ants

Ants might be the most underrated insects, but here are some lesser-known facts giving them much-needed validation.

Types of Ants in the Rochester Area

There are various ant species, but some of these species have been a cause of nuisance for residents of upstate New York and the Rochester area. Below are some species you’ll come across more often during summer:

Carpenter ants infest areas that have water. You will mostly find them in woods, damp trees, and firewood. If you see occasional ants around springtime inside the home, chances are there is a nest somewhere in the wet wood of the house’s structure. They are a danger to humans because they can weaken house structures. Carpenter ants can destroy window framing, door headers, footers, and even the sill plate that holds up your home. Then, as their colony thrives, they hollow the wood to make space for nests. As opposed to termites, you will find shredded wood fragments near the galleries made by the ants. Termites leave mud-like leftover wood near galleries. Homeowners often confuse the termites and carpenter ants since they have similar body structures and a liking for wood. The winged or swarming ant activity usually alarms people.

A classic sign of an infestation is seeing wood shreds and dead insects near galleries and nests. These are consumed by carpenter ants and indicate the nest is nearby. They may infest in dry wood too, but they prefer damp wood. Yyou are most likely to find carpenter ants’ nests near water leakages, behind the dishwasher, sink, bathtub, and poorly flashed chimneys. You can also locate the nest by tapping the screwdriver against floorboards and wooden surfaces, listening for hollow sounds – archetypical of damaged wood.

Commonly found in Europe, Australia, Southeast Asia, and America – Pharoah ants are termed as notorious and nuisance. Pharaoh ants are a nuisance for their ability to split. When the nests grow larger, they split from the mother colony, assigning a female ant from the brood as queen, and live on to multiply. They have a penchant for infesting unlikely spaces like hospitals, labs, etc. A famous case that goes down in the chronicles of a weird place to infest is a hospital in Texas. The hospital reported a significant infestation on floors of burn victims and newborns.

Another nuisance is their ability to transmit pathogens like Salmonella, staphylococcus, and streptococcus. In addition, they forage on food if left outside, even for a bit of time, whether it be oily or salty foods. They also have a weird penchant for the choice of nests, such as between the layers of linen, clothes, sheets of stationery, and piles of trash. Tracking all their nests and eradicating them from the building is tedious and requires experts. Often people move out of homes and buildings due to pharaoh ant’s infestation. These ants definitely require a professional Rochester ant exterminator due to the specific details needed to control.

They are relatively small and lighter in color. They are native to Argentina, Bolivia, and Brazil but are now found across the planet. It is speculated they were first introduced to the United States back in the 1800s when coffee ships reached New Orleans from Brazil.

Argentine ants also divide from their mother colony with some workers and assign a queen among the newly moved clan. Unlike carpenter ants, they have several queens in a colony, which allows them to multiply faster in number.

These networks of colonies can develop into super colonies that contain at least millions of ants. You are most likely to find their nests near moist spaces beneath plants, sidewalks, under floorboards, near pipes, and plant mulch. When the weather is not to their liking – too cold, they crawl inside the house, making nests in large numbers. They enter the building through plumbing and sewage. They also crawl over trash, dead animals, and mulch; they can be the carrier of Salmonella and dysentery. If any food is left outside for a short time, they can quickly reach and contaminate it. When in large numbers, Argentine ants can be a danger to poultry chicks or beehives.

The funny-smelling swarmer is interesting among the ant species. When squished, they smell like lemons and emit the scent when they sense danger. Citronella ants look close to termites, giving homeowners a scare when they see them crawling inside the house.

The great thing about these ants is they do not like to live in the houses. But you will find them indoors once the weather drives them inside. These ants forage on the honeydew of aphids. They have no interest in other foods. You will always find them in moist soil, mulch, woods, and lawns.

Acrobat ants share the characteristics of Citronella ants in their habitat preference. You will rarely find them invading homes, but if you see them, it is a clear indication of a big colony near the house. They do not harm the structure like termites, but gradually they will damage it. The actually pace of destruction will depend on the colony’s size.

These are beautiful creatures with the heart-shaped abdomen. When threatened, they do the mini acrobat of raising their abdomen over the head and thorax – hence the name. They hardly sting, and it is a mild sting. But the sting is used as a defense mechanism when feeling threatened.

All ants have four stages in their life cycle—egg, larvae, pupa, and then an adult. Developing into a full adult ant takes roughly eight to ten weeks. The queen ant denotes her life to lay numerous eggs. The eggs develop into male and female ants. Since the ants are unified species, they work together to forage, care for eggs, and defend the colony.

The female ant work in the colonies to care for the larvae and find food. Meanwhile, the male ants’ only purpose is to mate. They have the shortest life span lasting hardly weeks. After mating with the queen, they soon die.

The drone ants (male ants) have wings, and you will hardly see them outside the nest. The ants that we usually see are female, and they do all the chores since they have a better life span than male ants.

Queen ant lives for years and lay billions of eggs in their life. The queen ant lays somewhere between 500 to 800 eggs per day on average. Some nests have one queen, while some may have more than one queen ant. The male and female ants live their course of life, which is a few months or weeks, and then die. When the queen dies, the nest is most likely to end in some species. However, in other ant species, they designate another female ant from the brood as queen and continue to thrive and multiply.

Ant’s sting is usually irritant and resolves within four to six hours. But some individuals are allergic to the sting, which can result in severe allergies or anaphylactic shock. The only reason ants come inside the house is for food. Some ants feast on wood while some forage on human food left out. Since ants crawl around dampened moist spaces, trash, plumbing, and sewage, their legs carry various pathogenic and toxigenic microorganisms. As they walk around the countertops, tables, or toys, they transfer these microorganisms and cause:

Dysentery: This condition results from consuming contaminated food. Apart from diarrhea, stomach aches, vomiting, and nausea are some mild symptoms of the disease. It lasts for three days to a week.

E.coli: It is another outcome of consuming contaminated food. It lasts for five to ten days, causing severe dehydration due to vomiting and diarrhea.

Shigella: An extremely contagious condition that causes intestinal infections and diarrhea due to unclean food or water consumption caused by ant infestations.

Salmonella: Another foodborne illness prevalent in the United States. The symptoms include upset stomach, diarrhea, fever, cramps, and nausea.

Smallpox: It is a contagious condition that has severe to mild symptoms. Receiver develops rashes on their body and experience headaches, body aches, and high fever.

Allergies: Certain elderlies, toddlers, and weak immune individuals develop mild irritation across the sting bite of an ant. While in rare cases, a person can go into an anaphylactic shock.

There is some clear indication of an infestation that requires homeowners to pay heed.

Ants are hardworking and resilient insects. They also can grow in number incredibly fast. We know that certain species multiply in number as soon as they find suitable conditions inside your home. Some may cause no harm to humans except a sting if they feel threatened. If you have a toddler or debilitated or older person in the home, you should be wary of the ants. Some children and the elderly get allergic reactions to certain ants, which can cause distress for homeowners.

A rare sighting of an ant in your home is fine, as it could be a wanderer. If you keep seeing ants or signs of ants inside your home, you need to call up exterminators immediately. Not only can their frass be distressing and harmful, but they could also be feasting on the house’s foundations.

EnviroPest is a Rochester ant pest control company solving all species of ant issues for decades. Our packages include our complete guarantee for an extended period, including all follow-ups and services based on the ant biology. This pest control is for offices, restaurants, homeowners, and bakeries, especially during the spring, the prime time for ant sightings and infestation. The trained and professional staff ensures that their distressed clients get the best services and the pest is eradicated 100%.