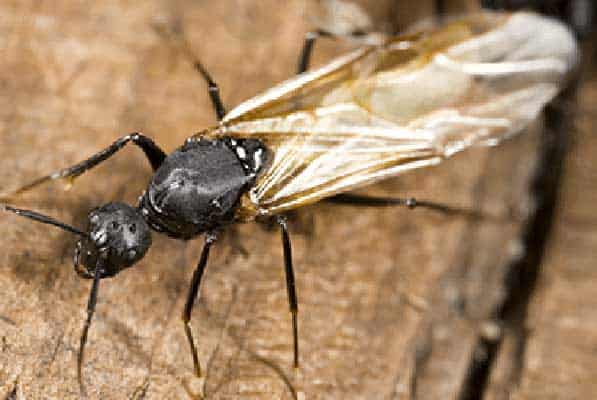 Carpenter ants can be found throughout the Americas, Europe, and other parts of the world. These ants can be mistaken for termites because they cause damage to the wooden areas where they nest. This mistaken identity can also happen because carpenter ants with wings can look like the swarming stage of termites as well. On the other hand, termites eat wood, whereas carpenter ants build galleries in wood to provide shelter.

The first step to identifying these pests with wings is to be sure you understand how to identify a carpenter ant. Carpenter ants of all species prefer decayed wood for nesting sites because it provides proper and consistent humidity and temperatures. Although they do not eat wood, they can cause significant damage if nests remain active for several years. A colony can grow into several satellite colonies near the parent colony over time. For extra space, workers excavate wood, causing extensive damage to structures and woodwork.

What Is The Life Cycle Of A Carpenter Ant?

A carpenter ant’s life cycle starts with the nuptial flight, which typically occurs in late spring or early summer, contingent on ecological dynamics. Male winged carpenter ants, or swarmers, mate with winged females during this mating flight. Females shed their wings shortly after mating, and males die. The female ants then look for a new location to establish their colonies. The queen is usually looking for a small crack in a wooden structure. She then shuts herself away inside the chamber and lays the first batch of eggs. She stays in the chamber until her first batch of eggs hatches into adult workers. During this time, the queen feeds on her stored fat reserves and wing muscles.

The queen feeds the young with her salivary glands until they are mature enough to forage independently. She looks after her first brood, and once that first brood of adult workers has matured, that first brood looks after subsequent broods. A large and stable colony takes three to six years to establish. These established mature colonies are the ones that develop carpenter ants with wings, so you can be sure you’ve had to issue for quite a while if your seeing them around your property. A carpenter ant’s life cycle is estimated to be 6 to 12 weeks from egg to adult. Carpenter ants’ development time can be extended by up to ten months in cold weather climates.

The only function of the carpenter ant queen is to lay eggs, but as worker carpenter ants mature into adults, they take on colony responsibilities. They hunt for food, care for the eggs, larvae, and pupae, and excavate galleries to expand and propagate their nest. Major workers act as soldiers to guard the nest, while minor workers forage food and care for the young. After two or more years, the queen begins to produce winged males and females, who will leave to establish new colonies. One queen is typical of a carpenter ant colony.

Where Are Carpenter Ant Nests Found?

Carpenter ants prefer to nest in damp wood or already damaged structures by other insects. As a result, most ants are found in decaying wood in windows, fireplaces, sinks, door frames, or open rooms, such as wall voids. This damp wood, adequate temperatures, and predatory protection ensure the colony will thrive. Two types of carpenter ant nests exist parent and satellite colonies. Parent colonies include laborers, numerous broods, and an oxen-laying Queen, while workers, mature larvae, and pupae may be in satellite colonies. Any of these nests in houses and buildings could become a mature colony and develop carpenter ants with wings to find other locations to establish.

Carpenter ants can build their nests both inside and outside. Structural ants frequently nest in hardwood trees with holes and other flaws when establishing colonies outdoors. The ant nests require consistent temperature and humidity, so they continually seek out moist or rotten wood. Ants that nest in non-wooden areas have found an alternate site that provides them with a consistent temperature, security from natural enemies, and protection from environmental conditions. Primarily, carpenter ant nests can be found indoors in moisture-damaged wood. Unlike termites and beetles, carpenter ants do not consume wood. Workers excavate galleries for nests while burrowing through wood with their mouthparts.

Carpenter ant damage to a house, building, or other structure can is based on the number and size of nests present in a given location. The longer an infestation goes unchecked, the more harm it can do. As a result, it’s essential to find carpenter ant nests as soon as possible. While carpenter ant nests are difficult to locate, most experts advise tapping wood surfaces and listening for a hollow sound that indicates damaged wood. Using this technique can cause ant workers to panic and appear. If you suspect your home has a carpenter nest infestation, contact a pest control professional to create a personalized plan for eradicating the infestation.

What Kind Of Damage Can Carpenter Ants Cause To Homes?

When it comes to structural damage, carpenter ants are incredibly harmful. Carpenter ants spend their whole lives biting and chewing moist and softwood, so if your house appeals to them, they’ll cause some havoc. Not only can this result in thousands of dollars in damage to your home or company, but it also has the potential to result in physical harm if the structural damage is not addressed and it results in failure. Carpenter ant infestations, including termite infestations, frequently go unnoticed until it is too late to save money.

Carpenter ant damage is distinct from termite damage, even though the two are often confused. These destructive ants excavate galleries or tunnels in rotting wood, while termites feed on the cellulose in the wood. Specifically, carpenter ants do not consume the wood, contrary to common opinion. Instead, they hollow it out so that it can nest inside, potentially causing structural harm. Carpenter ants, unlike termites, typically take years to inflict severe damage to a structure.

A carpenter ant infestation in a structure typically indicates a moisture problem. That’s these structural ants are frequently found near dishwashers, sinks, laundry areas, and bathrooms—especially where there are plumbing leaks. By removing the source of the moisture, the structure becomes less appealing to the ants. Carpenter ants will infest building materials like wood and foam insulation and cavities in hollow doors and window frames. It’s worth noting that since ants eat dead vegetation and other insects, they may be living outside but foraging indoors for food scraps or moisture.

If you believe you have carpenter ants or have seen them inside your home on a regular frequency, we recommend contacting a professional ant exterminator near you. They can help you access whether you have an issue and what you can do to resolve carpenter ants in your home to avoid severe damage.